Dissecting audiences on Amazon Merch on Demand: Trends and top sellers in the Asian segment 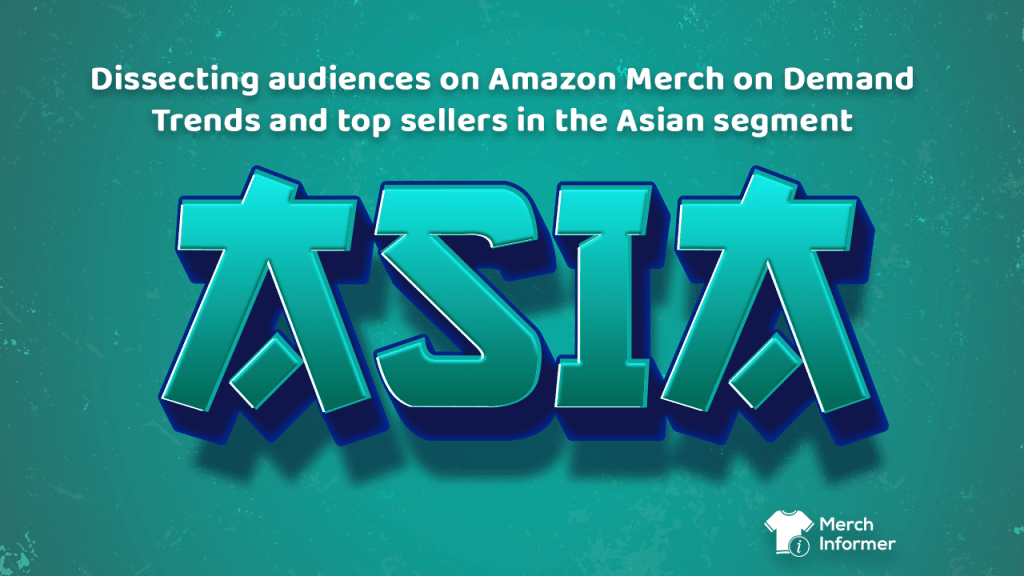 As of 2020, there were 18.43 million Asians living in the United States. Asian Americans account for around 5.7% of the total population. Made of people from a wide range of nationalities such as Chinese, Korean, Japanese, Indian and Vietnamese, the Asian audience can potentially become your golden goose.

So, is the Asian market worth exploring on Amazon Merch on Demand and if so, what should you do to carve yourself a piece of it?

We take a closer look.

How does one uncover the ethnicity of the buyer audience on Amazon?

A buyer audience on Amazon can be discovered by digging deep into a particular target group’s needs and wants, their cultural celebrations of popular holidays, as well as psychographic and geographic locations throughout the United States.

When it comes to ethnicity or nationality, you must look for culturally defining features and characteristics in order to unearth the desired audience, and to better cater to its needs.

How big is the Asian segment of buyers on Amazon?

Our first step toward defining the size of the Asian segment on Amazon is to head over to Amazon.com. Our goal here is to determine the number of listings for a wide range of Asian-specific merch.

Our findings reveal the following:

What becomes apparent here is that South Korean, Japanese, and Chinese t-shirts dominate the space on Amazon.com. This means that with the hundreds of thousands of listings on the marketplace, there is significant demand for such products. It’s also important to differentiate between t-shirts designed for men, women, and children, as well as more nationalistic t-shirts, which contain the respective country’s flag.

For example, people from countries such as South Korea may be considered more nationalistic and nation-proud as opposed to a country such as Vietnam. In addition, it’s important to note that a search for “Indian t-shirts” can yield results that bring back t-shirt designs that are related to Native Americans and not necessarily India, the country.

Therefore, as a seller, your segmentation should take these features and national characteristics into account. They ought to guide you into effectively using clear and targeted keywords.

For more on this, take a look at our discussion below.

What are the most popular keywords in the Asian market on Amazon? 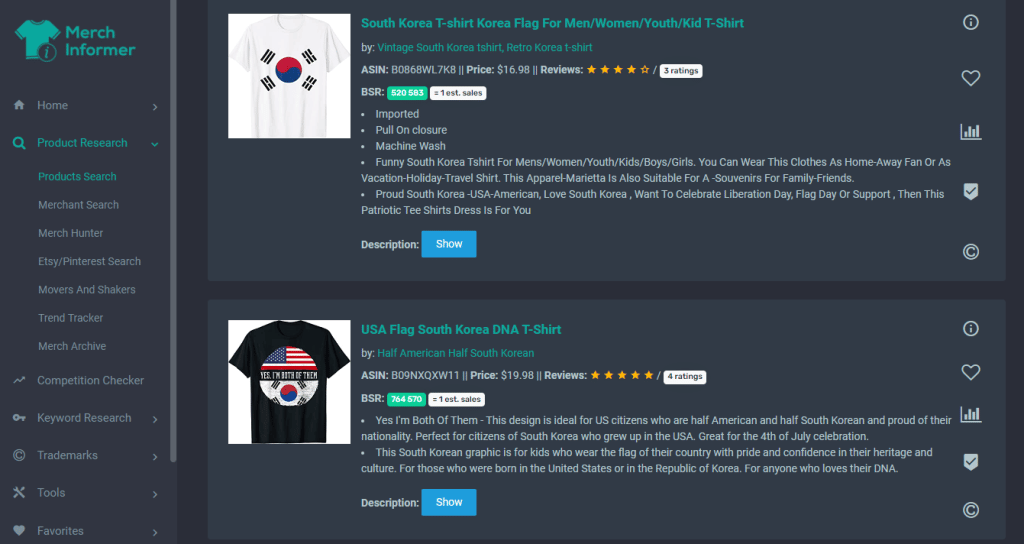 To explore this market segment in even more detail, we used Merch Informer’s “Products” module to help us determine what the most frequent keywords are in the Asian market for t-shirts, alongside their best-sellers rank (BSR) and their average prices. We established the following:

It’s evident from the above that keywords related to Asian-themed merch have relatively high BSRs, with an average price reaching the near $20.00 mark.

Yet, when competing in this market, it’s imperative that your listings include the name of the targeted country or nationality. This is the only way to gain visibility from the corresponding segments on the Amazon platform.

Furthermore, depending on the country, national specificities must be taken into account. For example, Vietnam veteran t-shirts have a lower BSR than a more general search for a “Vietnam hoodie” or “Vietnam shirt”. However, it’s questionable whether the former falls into the “Asian segment on Amazon” definition. Our advice is to pay extra attention when navigating the cultural and historical peculiarities of the Asian sub-groups to avoid any misunderstandings.

What are Asians mostly buying on Amazon Merch on Demand?

The variety of products on Amazon Merch on Demand can be overwhelming. However, we can deduce that South Koreans, for example, are primarily purchasing flag-related t-shirts from the platform. Special holidays like “Chuseok” in South Korea yielded results of zero searches, which means that sellers are not capitalizing on various national holidays.

In the Japanese market, we see a wide variety of t-shirts with highly particular niches. These include kanji writing, anime and manga figures, cherry blossom themes, and others.

The Chinese segment also demonstrates diversity in terms of searches and purchases. This is clearly illustrated by designs such as the Chinese flag, traditional Chinese prints, Chinese dragons (as a symbol of power and strength), etc.

When it comes to the Indian audience, there are numerous offerings of the Indian flag, although there is some overlap between referring to India as a country and Native American designs. Sellers should therefore exercise caution when targeting this particular segment to ensure that their designs do not get lost in a different niche altogether.

Finally, the history of Vietnam comes to the fore with the prominence of Vietnamese veteran shirts, hoodies, and sweatshirts. The designs on these items are generally inclusive of the Vietnamese flag, as well as other typical Vietnamese emblems, such as the Vietnamese star.

What are some of the trends and seasonal events that attract the most Asian buyers?

As for trends and seasonal events that attract the most Asian buyers, it would be better to look at national and cultural artifacts instead of events per se. Our search on Merch Informer yielded results that highlighted the former as opposed to the latter.

As mentioned above, the massive South Korean holiday of “Chuseok” yielded zero results, whereas the South Korean flag yielded over 500, as did results for K-pop and other culturally exported elements from this nation.

The same can be said for Japanese merch products. The Japanese flag, as an expression of national identity, cherry blossoms as part of the country’s rich natural landscape, references to cities such as Tokyo or Fukuoka, and Catzilla designs (as part of the original Godzilla franchise) make up the bulk of purchases for this segment.

The Chinese, Indian, and Vietnamese segments show similar trends. Each of these countries’ flags are prominent features when it comes to designs on Amazon Merch on Demand.

Who are the top sellers in the Asian segment and what are they doing right to attract Asian buyers?

Based on our research, it becomes clear that the top-selling merchants on Amazon are those who focus on Japanese and Vietnamese audiences. We chose two listings with multiple sales to determine what they are doing right to attract Asian buyers.

First up we have “US Army Vietnam Veteran USA Flag Shirt, Veteran Vietnam Army T-Shirt”. This item was created by Veteran’s Shirt Vietnam Veteran. Priced near the average at $17.98, this item has a considerably low BSR of 181,380 and has made around 13 sales since inception. The product also has received 93 ratings to date.

Our second top-seller is the merchant selling “Japanese Sunset Catzilla T-Shirt”. This item is created by Vintage Sunset Attack Giant Cat. Although it has received zero ratings, the t-shirt has a low BSR of 116,881 and has made 23 sales to date. 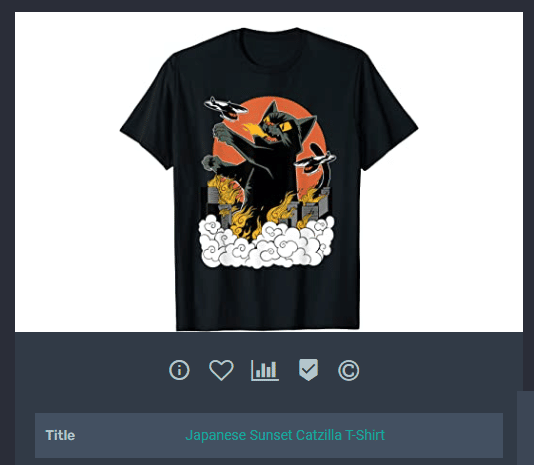 What both of these merchants have in common is that they have carefully catered to audiences in highly specific niches. This is done through utilizing high search volume and low-competition keywords in both their titles and descriptions.

Although the second seller mentioned above has a comparatively short title, it does signal to the buyer exactly what they’re getting. It also caters to search queries for odd Japanese items such as “sunset catzilla”.

Furthermore, both sellers have priced around the average for the Asian category in general, not overstepping the $20.00 mark.

With regard to designs, they both appear to be professionally created with highly intricate and precise imagery used.

Our tip-list for sellers in this segment

We conclude with some of our top tips for sellers looking to target the Asian market.

Indicate the nationality of the target group

First off, it’s crucial to differentiate between the different countries and nationalities, as there is no single Asian buyer persona. Not segmenting properly can lead to unjust stereotypes, thereby alienating your audience.

Include cultural references in the title

Furthermore, it’s essential to ensure that country names appear in your listings as primary or seed keywords. Whether you use the country name or its adjective (e.g. Japan and Japanese), be sure that either of its forms is included in your listing title.

Also to be included in the title is the specific cultural or subcultural reference. We witnessed this approach in the bestsellers, who’ve referenced Vetnam veterancy and the catzilla meme.

When it comes to your description, targeted keyword usage is also critical. Here, you will want to emphasize the country, the particular subgroup you’re catering to, the specific cultural element or tradition, the target audience (e.g. Vietnamese veterans), and other country-specific distinguishing features and qualities.

Price around the average

There is also the crucial impact of price. Luckily, with the help of Merch Informer, we were able to discover that most merch products in the Asian market appear to be priced around the $20.00 mark.

In fact, the average is around $18.50. This is a good strategy to employ because you’ll not be alienating customers with highly expensive products. Instead, you’ll be catering to their particular budgets without coming across as too cheap or offering a product of poor quality.

While the variety of designs on Amazon Merch on Demand is extensive, it’s important to choose one theme and stick to it. If you are opting for more simplistic designs, which feature a country’s flag for example, you’ll want to use the exact and most accurate colors to depict that flag.

When it comes to more complex designs, Asian-themed merch is distinguished by its richness and diversity, which is something you may wish to emulate. This signals quality to your audience and is more likely to earn you sales. One example is a cherry blossom t-shirt. Yes, you can use clipart cherry blossoms, which are rather simplistic. However, to add more depth to your t-shirt or apparel product, consider using real art (preferably your own) to create a highly unique, original, and niche design.

Catering to the Asian segment on Amazon Merch on Demand can be a highly profitable endeavour. However, it requires deep research and a strong strategic approach. You will need to combine your keyword research with a great design in order to break through to this market. However, once you do so, there will be no looking back.

If you’re worried about where and how to do your research, create your design, and upload it to the marketplace – don’t be. Merch Informer offers you an entire platform with a rich array of functionalities to help you penetrate this and other market niches.

For merely $9.99 per month, it’s a worthwhile investment in your Amazon Merch on Demand side gig.

How to be ‘Black Friday Ready’ In One Day

Rock’n’roll t-shirts on Amazon Merch on Demand: How big is the scene, is it worth your while? 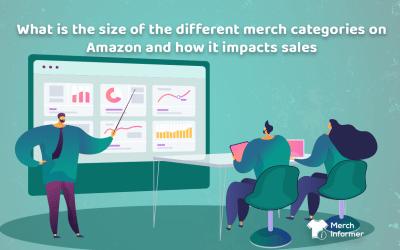