T-Shirts And Politics: Is Political Messaging Worthwhile On Merch By Amazon?

Whatever your political views may be, one thing is certain: Politics is here to stay whether we like it or not.

There will always be conflicting sides in the political discourse. While many people are happy to express their political opinions through t-shirts, it would be interesting to find out how political topics and figures fare on Merch by Amazon.

This is especially the case with print-on-demand (POD) t-shirts.

Are Politics Allowed On Merch By Amazon?

Merch by Amazon has many rules and guidelines for the content and designs that can be printed and sold on the platform. For example, one such rule is that a Seller cannot sell trademarked names and words. Another example is the fact that parodies and mashups are prohibited.

But are political figures a part of this category? The quick answer is “no” (although if you were to make a mashup of the Obama “Hope” campaign, for example, this could get you in trouble).

This is because political figures are considered a part of the broader community or public sphere if you will; a resource for all to use. In essence, anyone can create and sell political t-shirts. This is why political messaging on t-shirts gets the go-ahead on Merch by Amazon.

Are Politics Popular And Competitive On Merch By Amazon?

Before proceeding to enter any niche on Merch by Amazon, it’s vital to do your research. And we have certainly done that!

Using Merch Informer’s Products Search tool, we can deduce that the political niche is here to stay, that it can be competitive, and that it has sub-niches that you can enter.

A product search on the keyword “trump” yields the following results: the sequence “trump trump” has been searched a whopping 77,414 times; “trump” 27,537 times; and “let trump be trump” 9,604 times. This should immediately tell you that there are people who are actively searching for Trump t-shirts on Amazon.

Next up is the current American president, Joe Biden. Another micro-niche if you will, a search for “Biden” yields interesting results, too with 27,516 searches on Amazon in total for the surname only.

The keywords “for biden” yield 2,826 searches, while “no biden” gets around 424 searches. That’s quite something. It means that even if you were to sell “no biden” t-shirts, there would still be a whopping 424 searches for the phrase, which you could, with average prices going at $17.28, turn into a couple of hundred sales. But what about politics in general? This is a broader niche that yields 9,643 results for the keyword “political” and 8,027 searches for “politics”. It may turn out to be profitable, but we recommend looking for something more specific.

Moving further, “politically” gets 2,634, and “not political” gets 2,347 searches on Amazon. This immediately tells us that there are niches and micro-niches to be exploited within the broad politics niche. You just have to stay in the loop and do your research.

What Are Some Of The Peculiarities Of This Niche?

When exploring the top-sellers in the political niche, it can be observed that there’s an overwhelming majority of t-shirts that contain slogans and re-worked images of the American flag. However, actual images of politicians are few and rare. And if such images were actually used, they were designed in such a way as to ensure that a copyright photograph is now a unique piece. This is in contrast to simply using a photo of a politician and using it directly on one’s design.

Sellers have also attempted to use humor in their slogans with examples such as “Me no speaky politics”, “Politics ruins everything”, and “Unvaccinated and ready to talk politics at Thanksgiving”. These are just a couple that stood out as potentially controversial conversation starters, especially at the dinner table.

Then there are the pro- and anti-politicians t-shirts that express strong political opinions. In most cases, however, political t-shirts (as mentioned in most descriptions), are created as either gifts for both men and women, or as a statement that a person would like to make.

Is It Worth It For Newcomers To Try And Enter This Niche?

There are high search volumes for political t-shirts and for individual politicians. There are even general topics that are considered controversial such as fake news, vaccinations, climate change, immigration, gun control, and more. And each of these can be exploited as a niche and sub-niche of the greater political spectrum.

But are there profits to be made here? 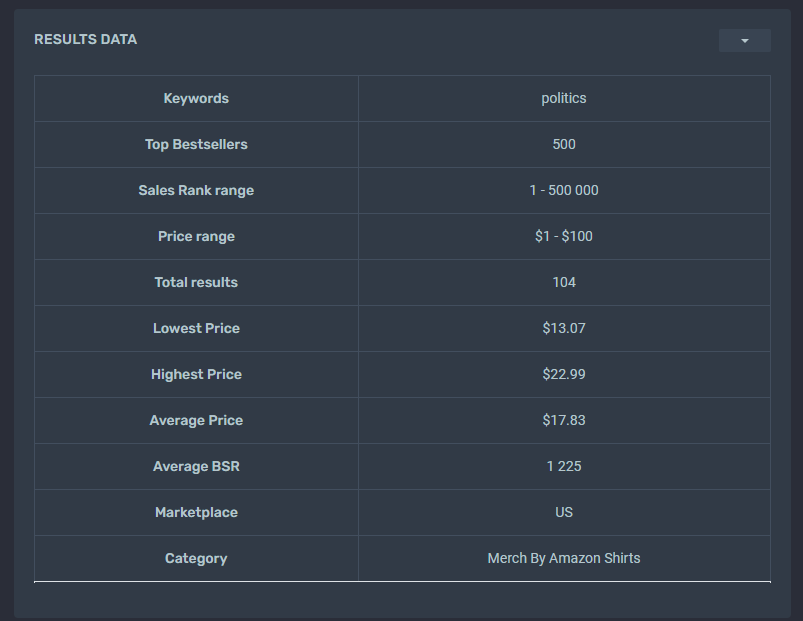 What Can Sellers Expect To Gain From This Niche?

Because politics is so personal and some people like to express their political opinions publicly, it means that as a Seller, if you were to enter this niche, you’d have a good chance of success. The competition is not nearly as high as you might think while the corresponding searches are. This leaves a lot of room for growth here.

The average prices of political t-shirts are just under the $20 mark, and this could mean good returns on your investment. Politics is also an ultra-specific niche and if you were to bring a level of humor to it, you could certainly make even more sales by turning a serious topic into something light.

When it comes to political messaging, some things are a given. There are many, many people out there looking to express themselves. A political t-shirt is one great way of doing so. They’re excellent conversation starters and whether humorous or serious, are a way to express individuality and creativity.

Sellers interested in the political niche are encouraged to give it a try because of its potential. And if you need a special tool kit to help you figure out how to optimize your listings, then Merch Informer is for you. With a few clicks of a button, you get all the information you need at your fingertips to make an informed and smart business decision.

The kicker? It goes for only $9.99 per month – a small price to pay for the huge amount of actionable Merch by Amazon data you can utilize. 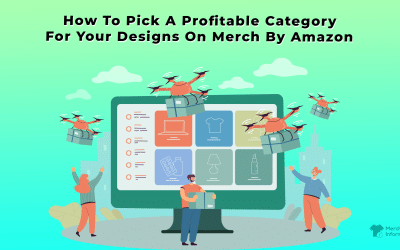 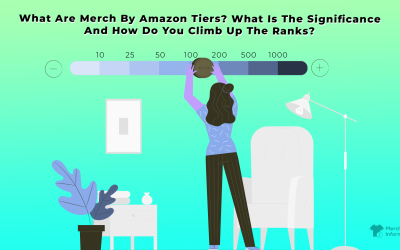 What Are Merch By Amazon Tiers? What Is The Significance And How Do You Climb Up The Ranks? 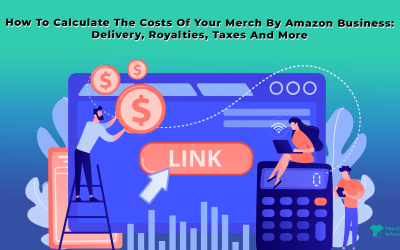 May 3, 2022 Amazon, Beginners Guide To Merch by Amazon

How To Calculate The Costs Of Your Merch By Amazon Business: Delivery, Royalties, Taxes And More