What Are The Best Graphic Design Tools For Print-On-Demand Merch? 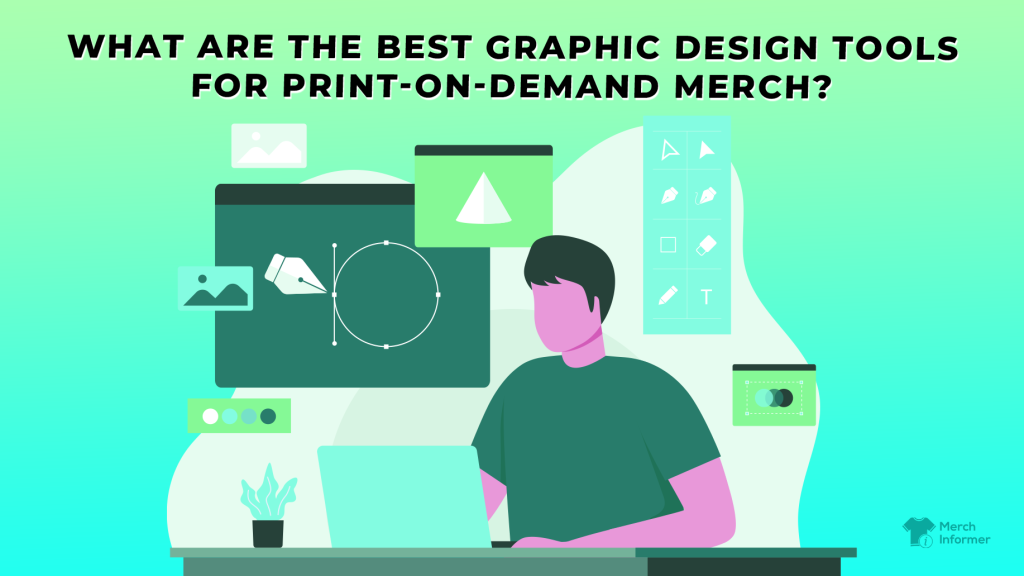 The success of your print-on-demand (POD) t-shirt business is dependent on the t-shirt’s design. However, you need an outlet for your creativity through specific design software and tools. Yes, there are many free options out there, but the truth is that they don’t offer a rich array of features. So, you’d like to opt for a paid plan. This is all good and well, but which one should you choose? And more importantly, do you opt for pixel/raster software or vector designs? And what is the difference between the two anyway? We take a closer look. What’s The Difference Between Pixels/Raster And Vectors? If design lingo sounds too technical, don’t worry. We’re here to break it up for you into […] 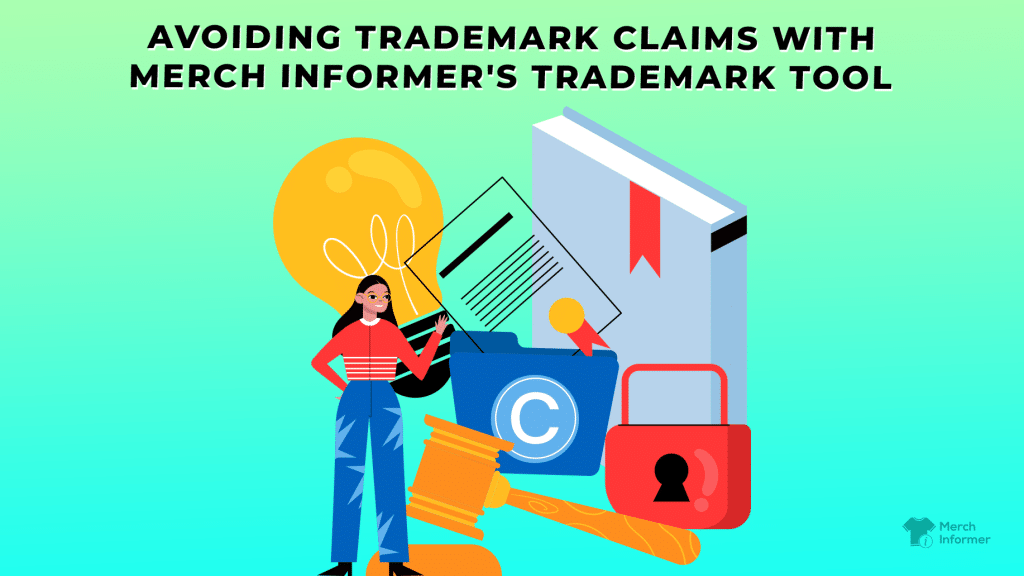 You may have woken up one morning with a great idea for a t-shirt to sell on Merch by Amazon. You’ve got the design and the catch phrase. You’ve even got the colors and sizing in mind. It’s only a matter of uploading the design and watching the sales come rolling in, right? Well, it’s a bit more complicated than that. This is because you’ve missed out one very important – perhaps the most crucial – piece of the puzzle. Checking trademark registrations. Don’t worry, this won’t take as much time as you fear. With Merch Informer’s Trademarks module, you can easily check trademarks and stay safe. Ready to find out how it works? Let’s dive in. What Are Trademarks […]

Are Hoodies A Worthwhile Merch by Amazon Niche? Let’s Go Beyond T-Shirts

March 28, 2022 Merch Informer Amazon, Beginners Guide To Merch by Amazon No comments yet 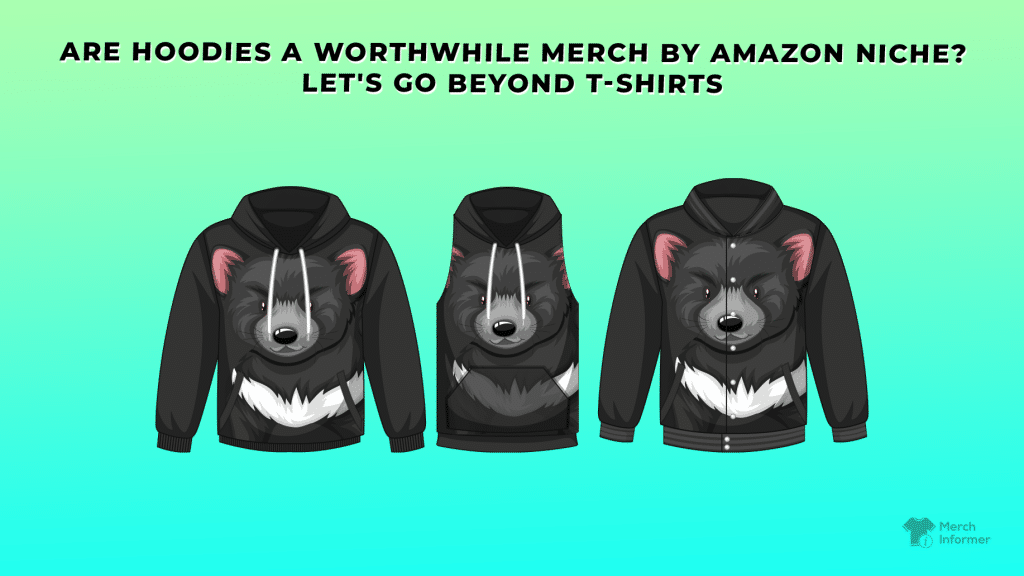 With roughly 2 million Sellers on Amazon, the platform is undoubtedly the place to be if you have products or designs to sell. Merch by Amazon makes things even more attractive, given that you don’t have to do any of the heavy lifting. Print-on-demand merch Sellers don’t have to worry about investing in their own materials, renting or buying their own storage space, or delivering products to consumers. All of this is handled by Amazon for you. Your sole responsibility is to create top-selling designs, make them visible to buyers, and enjoy the profits. But Merch by Amazon isn’t called that for no reason. Although t-shirts are by far the most popular category, and the most common product type in […]

March 28, 2022 Merch Informer Amazon, Beginners Guide To Merch by Amazon No comments yet 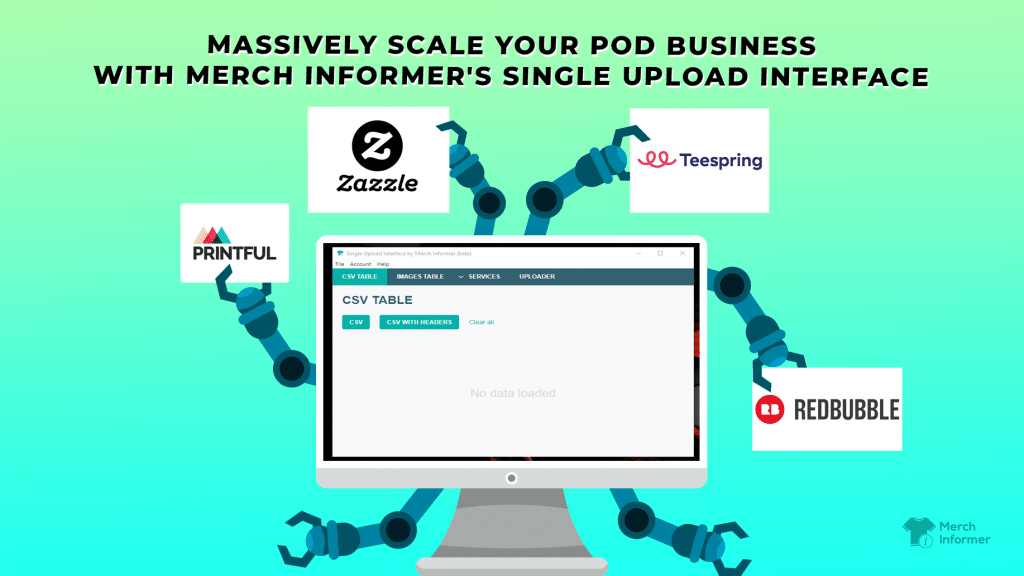 Selling merch on Amazon, whether as a side gig or a full-time job, requires a considerable time investment. There are a ton of things to think of and tick off your list. Priorities include creating product designs, doing research for appropriate keywords to include in your listings, and generating traffic to your products. Oh, and there’s also one of the most time-demanding tasks – creating product listings. So how can you cope with the time deficit and still manage to scale your business to enjoy the sales you’re after? The answer is simple. By using Merch Informer’s Single Upload Interface (SUI). How does it work? Let’s find out. What’s The Single Upload Interface & Can All Sellers Benefit? Imagine being […] 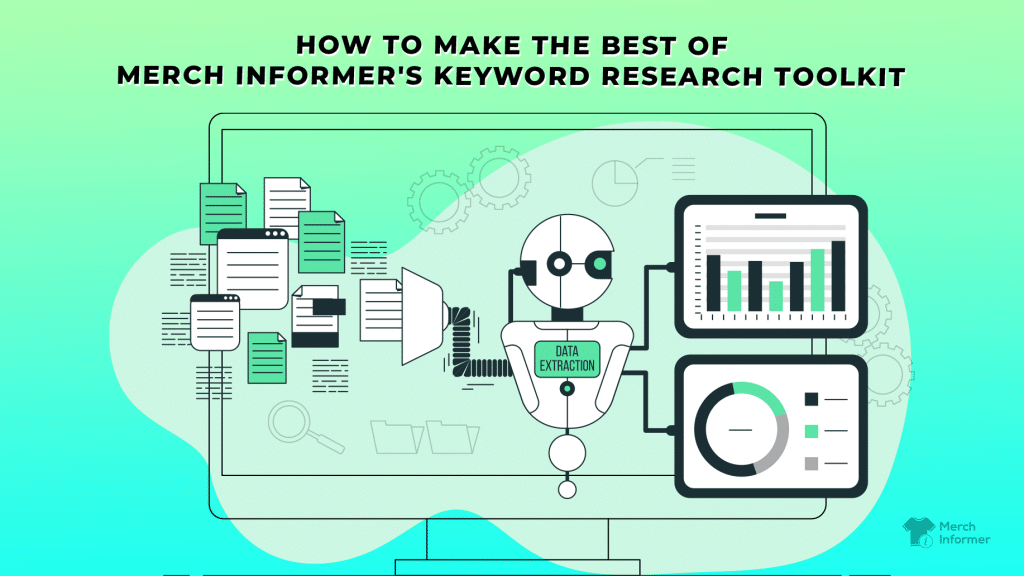 There are two crucial pillars of success when it comes to selling Amazon print-on-demand (POD) t-shirts – great design and proper keywords. Keyword research is vital because it helps you get in front of the right customers. It also allows Amazon’s algorithm to rank you more appropriately, ultimately leading to more sales. When it comes to keyword research, you have two main options: do it the hard way or the easy way. The hard way involves scrolling through thousands of listings manually, taking notes on the side, and merely hoping that you hit the bullseye. The easy way, on the other hand, is doing your keyword research through Merch Informer. The software offers you three primary tools for conducting your […]

Seasonality In Merch by Amazon T-Shirts: Learn How To Exploit It Or Let Your Competition Beat You At It

March 7, 2022 Merch Informer Amazon, Beginners Guide To Merch by Amazon No comments yet 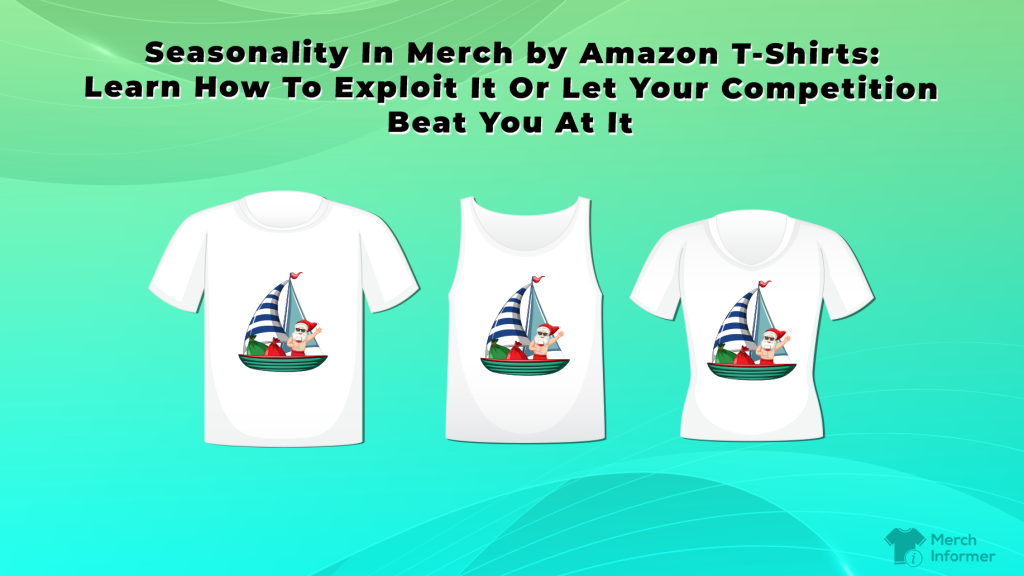 Selling print-on-demand merch on Amazon may be a side gig for some, but for experienced sellers who know what they’re doing, it could easily turn into a full-time job. A lot of sellers rely on print-on-demand t-shirts or other merch to make them profits that couldn’t even be dreamt of at a nine-to-five job! But how can this be done and can you also grow your sales to this level? To do that, you need to think strategically and consider timing. Seasonality is a popular factor that can influence sales in any other type of business. So, is it relevant to print-on-demand merch on Amazon? Can holidays or seasonal trends affect sales? And if they could, what can you do […]

March 7, 2022 Merch Informer Beginners Guide To Merch by Amazon No comments yet 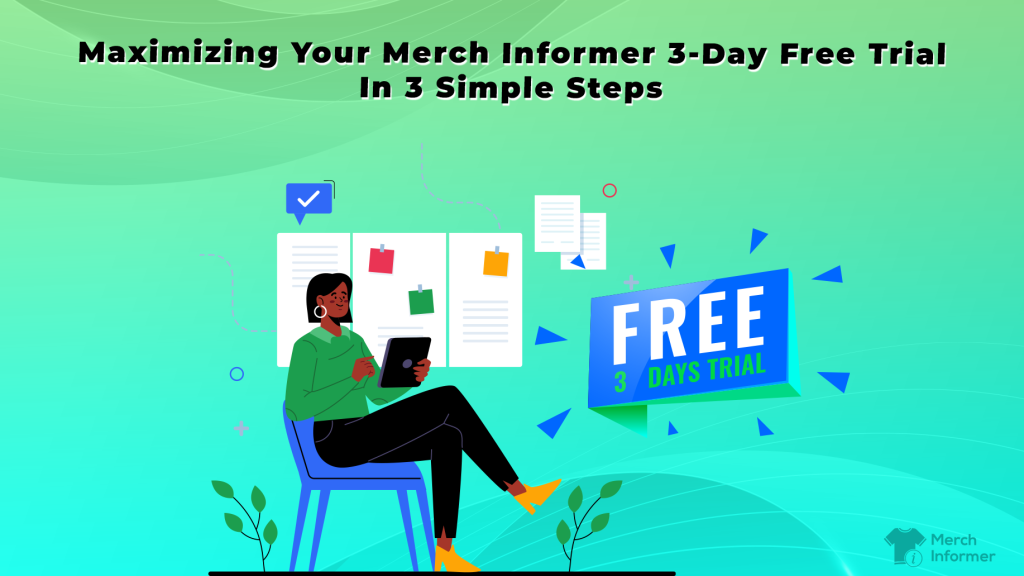 Starting your print-on-demand (POD) t-shirt venture with Amazon can seem like a daunting experience. There are niche searches to find out who your competitors are and what the best niches are, the keyword research you have to put into it, plus the actual design and uploading on the Amazon platform to get in front of an audience. It’s time-consuming and it takes a lot of effort. But what if you had just 72 hours or three days to get all this and more done? Is it even possible? The answer is a resounding “yes” and it comes with Merch Informer’s 3-day free trial. In the space of just three days, you could accomplish what would normally take you weeks to […]

February 23, 2022 Merch Informer Beginners Guide To Merch by Amazon No comments yet 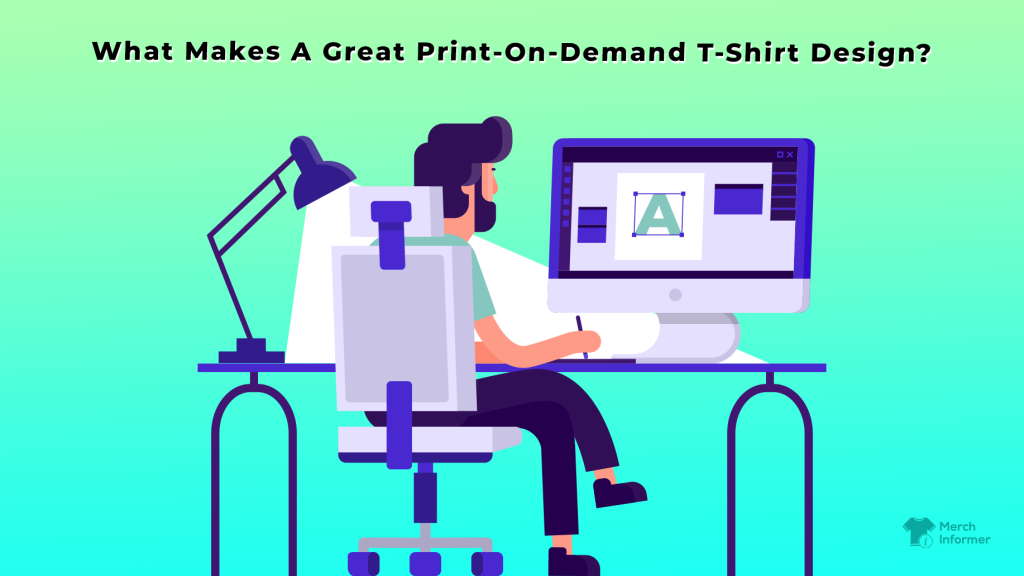 Getting your t-shirt designs on Amazon and tapping into the print-on-demand business is one of the best ways to make some honest money on the side. In fact, you can turn your Amazon gig into a six-figure business, as you gain experience and improve your sales. But before you can watch your profits grow, there are a few things that you should acquaint yourself with as a merch Seller; and the most important one is design. You don’t need to be a professional designer. However, knowing what makes a t-shirt great will certainly help your merch gain popularity on Amazon. So, without further ado, let’s see what the key elements are when it comes to great t-shirt designs. The Right […]

What Is The Single Most Successful Print-On-Demand T-Shirt on Amazon And What Made It The Best? 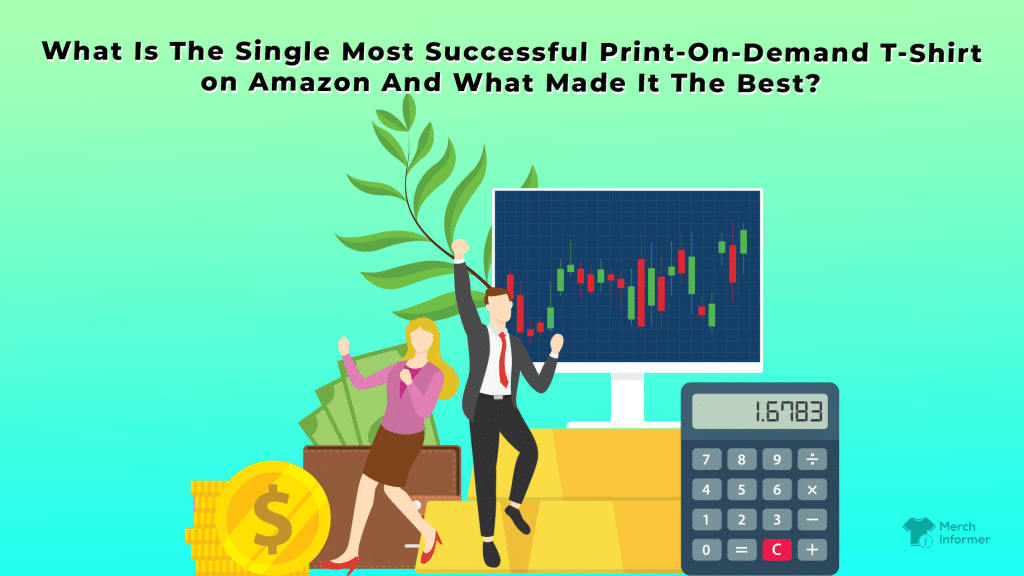 It all started in the Navy. That’s when t-shirts first appear to have been introduced for soldiers to wear under their uniforms. Then, they became a sort of fashion statement. A way of expressing quirks, tastes, one’s sense of humor, their style, and even an indication of hobbies and interests. They also became popular amongst cult followers of music and films. But let’s take it back to 1977, when the “I love NY” t-shirt was born. Initially, it was created as a way to promote tourism to this bustling city. However, the logo itself became massively popular and appeared on countless t-shirts ever since then. In fact, the trend has taken the world by storm, with many major cities being […]

February 23, 2022 Merch Informer Amazon, Beginners Guide To Merch by Amazon No comments yet 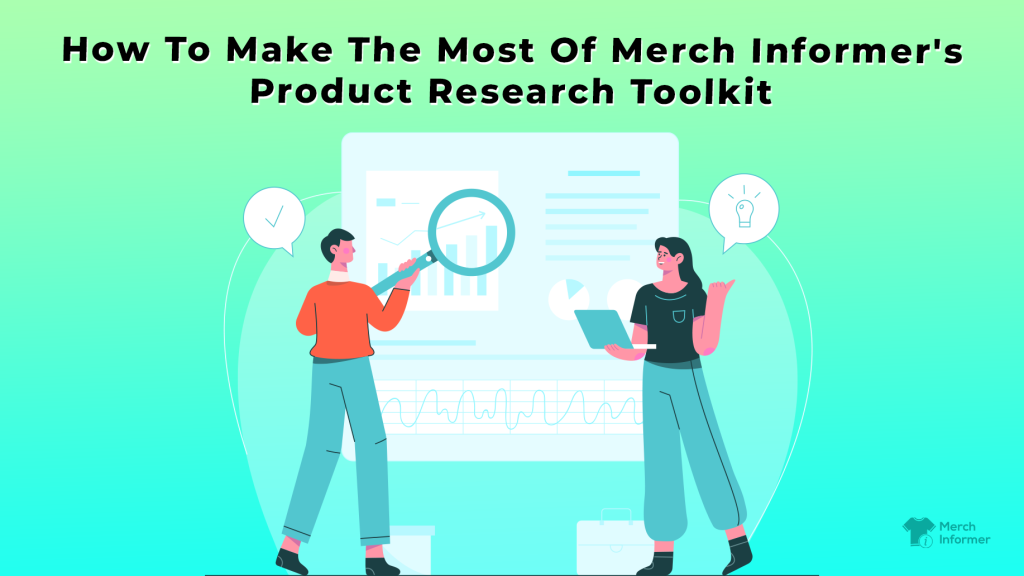 Selling your unique designs through Merch by Amazon is undoubtedly one of the best ways to make a passive income online. But let’s be honest. It won’t be easy unless you know exactly what you’re doing. Getting started without having the research to back your decisions is something like going into a maze blindfolded. However, your experience as a Seller on Amazon doesn’t have to be an uphill battle thanks to Merch Informer’s Product Research tool. Without beating around the bush, let’s dive right into it and see how the tool’s features can help you create designs that sell like crazy. Product Research Toolkit Overview If you’ve ever done product research on Amazon the traditional way, you’ll agree that it’s […]